About Me.  I’m Walter Dilley, holder of an Amateur Extra class license with call sign of kd7dny. I was first licensed in 1998 but have roots in radio electronics and short-wave listening since I was 7 years old. My first radio was a classic 1N34A crystal detector with ferrite-core inductor and 365mmF capacitor driving a pair of Allied Radio headphones!  Wow, that was fun, listening to multiple radio stations, all at the same time, from the San Francisco Bay area and surrounds.

I grew up at a transition time between vacuum tubes and transistors. I loved to disassemble old TV’s and radios. Started learning how to fix ’em, too. I guess that’s why I have an appreciation for hybrid radios.

My first computer was an 8080-based, S-100 Bus backplane beauty running at an amazing 500 KHz clock cycle. Having 1K byte of static memory was a big deal back then. Who would have thought we’d exceed the 64K byte memory addressing scheme? I still have that computer. Have to pull it out someday. My kids would be amazed. I can just hear it now, “Daddy, where’s the app screen?” <grin>

As a youth I loved to listen on my Heathkit GR-81 super-regenerative receiver. Sometimes my dad even let me use his Knightkit Star Roamer receiver. After I obtained my license I became focused on VHF and above. But it was in the 2007-2008 time frame that I was reading on the Glowbugs reflector about the Bruce Kelley ’29 QSO Party event. That re-sparked my interest in HF and led me on the search for an HF radio (and license upgrade). Someone mentioned the Kenwood hybrid series and the search was on at the local hamfest events. I found a TS-530S at the Scottsdale Hamfest and so began the hybrid quest.

After joining the Kenwood Hybrid Radio list I realized how much fun the hybrid series would be. When one of the list members offered (in 2015) to sell his Hybrid Parts Inventory business, I picked it up in Texas and brought it to my home in Arizona. Now it’s time (in 2017) to realize my dream of having a repair service and selling parts and kits, too. I’m also an engineer in the Aerospace Avionics field having worked on systems design and certification of cockpit displays for commercial transport-category aircraft such as the MD-11, MD-80, B717, B737 and B777. If you’ve flown with any major airline in the last 25+ years, then you’ve flown with my handiwork (and that of many others, too) on board in the cockpit and avionics bay.

If you need an Aerospace Systems Engineer, look me up on LinkedIn. I’m also good with hardware. My first job as an engineer was to help design and build a synthetic-aperture RADAR ground-based display system for the SR-71. That was a fun job!

Thanks for taking the time to read about me. How about you? I’d love to hear your story. Send me an email or use the Contact page. 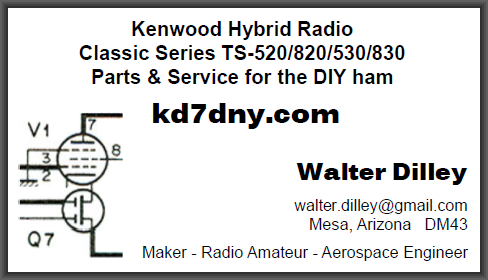